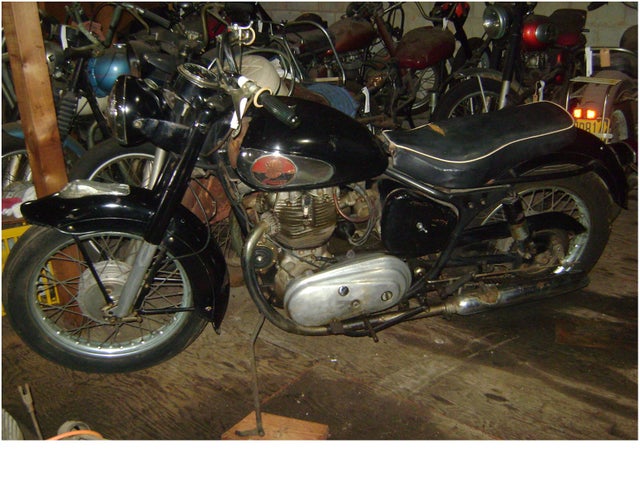 Another warehouse find! This Trailblazer has been in a warehouse for over 40 years!!! I'm pretty sure the motor and transmission were overhauled before it was put in the warehouse. The motor runs and sounds very good! It charges, everything seems to work. I think quite a bit of the paint is original but some has been repainted a long time ago, such as the gas tank. This bike is battery ignition. Anyone that knows anything about these Indian Enfields knows that they are very scarce, they were made in very small batches for each of the years and models. Most models only having around 1000 bikes per year. Most mechanical parts are Royal Enfield but the body items were made for the USA Indians. The hardest item to find for these motorcycles is the sheet metal and the parts that make them an Indian, not a Royal Enfield.

A small bit of history - In the late 1940's into the mid to late 1950's Indian was the sole importer of every British motorcycle that came into the United States, except BSA and Triumph, one of these bikes being Royal Enfields. Indian contracted Royal Enfield to build them motorcycles. So from 1955 to around 1960 there were no Royal Enfields in the United States, we got Indian Enfields built to Indian's guidelines. The rest of the world got Royal Enfields, one of the main reasons Indian Enfields are so scarce. Contact me for more information. ((Please disregard the Quantity and "Add to Cart" button below))